The Friendsgiving origin story: When and how did it become a thing? 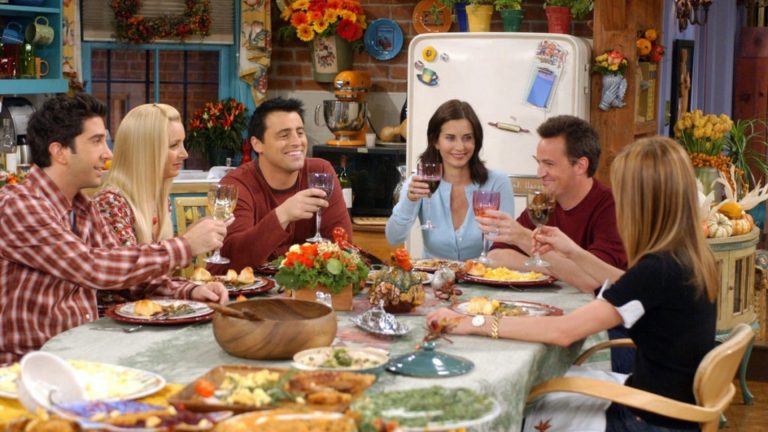 Let’s be brutally honest — traveling for Thanksgiving, no matter how much we love our families, isn’t always the most enjoyable way to spend a holiday weekend.

First, you’re forced to ask for time off using your hard-earned PTO.

And when everyone flies on the same weekend, you might as well use your miles on a plane to Spain for the money you’ll spend trying to cram yourself onto an overbooked flight to Wisconsin.

On top of all that, add in storms, delays and sleeping on couches or cots (we’ve all seen Planes Trains and Automobiles, and those aren’t pillows).

Oh, and we can’t forget to mention the actual family part. Spending a lengthy dinner repeatedly being asked why you’re still single, or told why you should be, is enough to drive one to drink … and wake up the following morning for yet another day of family fun, accompanied by a hangover.

In the past 20 years, Friendsgiving — an alternative option for breaking bread and giving thanks — has emerged. They say you are born into your family, but you pick your friends. So, why not pick who you eat your holiday meal with?

With more unconventional families and fewer people marrying and having kids, gatherings are becoming increasingly less familial and more motley crew. Not surprisingly, according to the Pew Research Center, Friendsgiving dinner has grown more popular than traditional Thanksgiving dinner in the age of millennials.

An overview of the mysterious history of Friendsgiving

How did Friendsgiving actually become a thing, though? Was it born out of an orphan Thanksgiving? Or just out of people fed up with the back-and-forth schlepping of the holiday season? Where does the term “Friendsgiving” even come from?

Well, there doesn’t seem to be one unanimous answer for how the concept started. Some believe it was inspired by a little sitcom titled Friends. You know, the one with Ross, Rachel, Monica, Chandler, Joey and Phoebe?

Kidding. It’s obviously one of the most popular sitcoms of all time, and for many years the gang hosted a Thanksgiving dinner together rather than going home to family. Monica cooked, and everyone else ate. That is, except for the year Rachel tried to make her English trifle.

But we digress! While the spirit of the term was present in Monica’s overly planned dinners — and we’d love to give Friends the credit for spawning Friendsgiving — nowhere in those episodes was the word actually used. So, did they or didn’t they? You be the judge.

For those who like watching the fancy fishbowl of how the other half lives, you may well remember this pivotal moment in Friendsgiving history. During a 2013 episode of The Real Housewives of New Jersey titled “Gobblefellas,” the term was tossed out as the Giudices and Gorgas celebrated.

Of course, we can probably all agree this seems a bit ironic, considering most of those ladies didn’t show up to make friends.

Hopping on the brand bandwagon

While Merriam-Webster acknowledges fans’ tendency to attach this friends-centric holiday to both shows, it suggests neither is where the term originated.

Rather, it notes that the trend really took off in the public vernacular when Baileys Irish Cream used the word “Friendsgiving” in a 2011 national ad campaign.

Posted by The Sweetest Occasion on Thursday, November 10, 2011

It quickly caught on and became a commercial hit, being used in slogans for basically everything.

Even Butterball became totally enamored with the term, filing for a 2013 trademark so their birds could officially be consumed with the moniker “Butterball Friendsgiving.”

Taco Bell also jumped on the occasion bandwagon, creating a day in 2013 called Taco Bell Friendsgiving Feast (the best way to capitalize on the trend while getting out of cooking a turkey, if you ask us).

Not to be outdone, baking giant Betty Crocker and market of millionaires Whole Foods joined in on using Friendsgiving in their signage.

However it actually came to be, the day has grown by leaps and bounds, now extending to dinners taking place throughout the holiday week. Some make the dinner more entertaining with certain themes or by adding in drinking games.

But at its heart, the idea behind Friendsgiving is to enjoy each other’s company and to have fun, on a voluntary basis. Bonus? There’s twice as much food, which no one is ever going to be mad at.