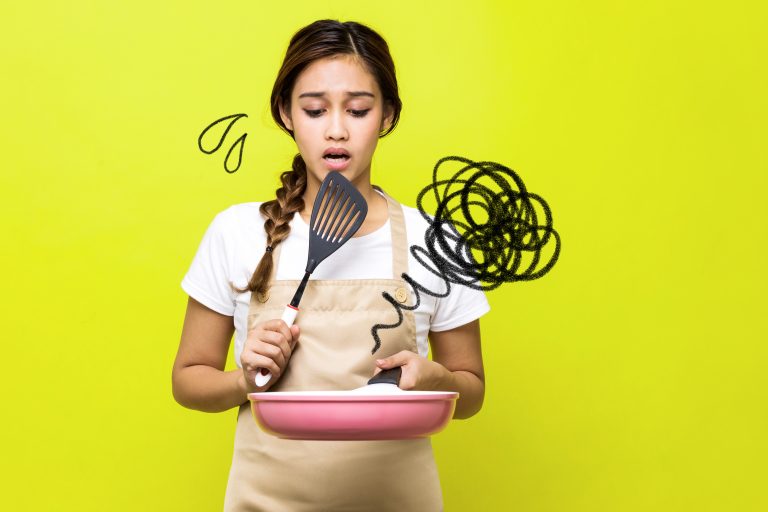 Everyone wants to be the “hostess with the mostest,” but the road to hell is paved with good intentions. What starts out in your mind as an Insta-fest worthy feast can devolve before you even make it to dessert. And before you know it, you’re hiding in the pantry closet, chugging a bottle of cooking sherry while the fire alarm goes off. You know, hypothetically. Let’s face it, everyone is capable of making Friendgiving mistakes.

I’ll admit to my fair share of F-day disasters, whether my cooking was less than stellar or my patience paper thin.

There was that year when I would only eat vegan, raw, gluten-free whatever and insisted my guests do the same — the tofu pumpkin pie I foisted upon them turned out to be more of a liquid puree sloshing around in a pie plate.

MORE: Friendsgiving dinner questions that are better than ‘What are you thankful for?’

And I’d be remiss not to mention the year I decided to go mega Martha Stewart and bring Pinterest-worthy cupcakes to an upscale fete. I worked late into the night until the desserts looked like adorable claymation turkeys out of a “Wallace and Gromit” cartoon. Alas, the persnickety vegetarian, sugar-free crowd at the dinner wouldn’t touch the confections I toiled over.

Fortunately (or perhaps unfortunately for the following people), I am not alone.

We casually polled Friendsgiving hosts to find out if they’d made any major mistakes over the years and, suffice it to say, there’s strength in numbers. Keep reading for validation that it isn’t just me and you whose Friendsgivings have gone comically awry.

When you make the mistake of inviting a ton of people without delegating the dishes, a lopsided menu is bound to happen.

Take it from Trish K. “We do a Friendsgiving almost every year, and one mistake we made was not being specific about who makes what. We ended up with five different kinds of potatoes and five turkeys one year. We made the most of it by turning it into a contest, and whoever won didn’t have to help with clean-up,” she told us.

Five turkeys make for a lot of turkey sandwiches the following week, and it is a bit of a bummer to be without a pie.

Still, that’s better than no bird at all. Elizabeth-Anne S. learned that the hard way. “We put the turkey in someone else’s cart!” she revealed. “We had two carts, so each thought the other had the turkey. Didn’t realize it until Thanksgiving morning, so we ended up with some weird turkey roll thing.”

Evin M. could sympathize, sharing that one Friendsgiving’s poor communication meant, “We had literally eight bags of chips and, like, 12 packs of plates.”

Ask for help — but be careful what you wish for

If you don’t delegate up front, you run the risk of getting majorly overwhelmed by the time your guests arrive.

“One year we just had way too many people — 19 total, with most staying at our place from out of town,” Jen M. lamented. “I was so busy cleaning and cooking that I barely had time to hang out.”

However, that’s not to say delegating will solve all of your Friendsgiving woes. Sometimes, it can even make them worse.

Take our reader by the name of Ella, who asked a friend to cook a dish. “I explained what to do, freed up a burner,” Ella said. “Her end result wound up being something that was the consistency of garlicky baby food. Then I turned into a PG-13 version of Gordon Ramsay, which made her cry. I apologized for being gruff, but it was an awkward start to dinner.”

Cooking the turkey? Kind of a big deal

While they typically aren’t part of the Friendsgiving crowd, tight-knit siblings can be the exception to the rule. TBH, though, Katie J. probably wishes she lost her sister’s invitation. “This one time, my sister accidentally turned the oven off while we were cooking the turkey, so dinner was delayed by two hours,” Katie J said.

Considering turkey tends to be the star of the show at Friendsgiving dinner, the evening can definitely derail if your bird is a no-show. Such was the case for Kristina, whose oven wouldn’t cooperate. “We put the turkey in at 10 a.m. We sat and watched three full football games. At 6 p.m., that bird was still raw. The oven wasn’t even warm. We were all pretty drunk, though.”

Pick a seat, any seat

Another big boffo made over and over is the musical chairs version of entertaining: Too many people, not enough seats. True, a home isn’t usually set up for an event-styled meal, but having people eat like they are waiting at a truck stop isn’t ideal.

Genesis D. suggests renting a table and chairs if you are inviting more than you can fit. “Turns out it’s cheap and it eliminates so much hassle because they just come and set it up for you. All I had to worry about was the food. Guests also appreciate not sitting on buckets and random stools.”

Cheyenne S. hosts Friendsgiving every year with her crew, and she also points to the seating debacle as a major source of frustration-slash-embarrassment, saying, “Every year it grows more and more, so seating is the biggest challenge ever.”

And nobody wants to be the host who slides a 24-pack of TP up to the table as a makeshift stool.

Sometimes seating isn’t an issue — but the table turns out to be a complete catastrophe. “The hosts had this really long, elegant glass table. Someone set something on it just right, and the glass shattered!” Christine R. recounted of one Friendsgiving-shattering experience. “We didn’t have a table to eat at, but the food was delicious!”

Don’t forget to put the “friends” in Friendsgiving

While it would be great if everyone got along, that could be pumpkin-pie-in-the-sky thinking. Brian P. speaks from experience with advice that is short and, well, not so sweet: “Let’s just say, don’t let a friend bring a friend that’s not a friend of yours, ha!”

Caroline points out the minefield of inviting two people who may not have consciously uncoupled. “So, if you’re part of a couple, and you each are friends with two people who used to be part of a couple, probably check with each other before you each invite each said friend and their new flings,” she suggested. Word of warning? You may be left with a huge meal when two people cancel at the last minute — which is precisely what these former flames and their current flings did.

And while that could have been a super-awkward meal, it may be even more awkward if people do show up and have nothing to say to each other.

Sarah R. recalls one such uncomfortable dinner, admitting, “We should’ve planned some sort of get to know each other activity since there were friends from all different walks of life.”

This isn’t a drive-through, dude

Here’s the thing, no matter how well prepared you are as a host, all it takes is one hiccup to throw a wrench in your otherwise lovely get-together.

Like, for example, the nightmare guest who showed up to Kelli F.’s Friendsgiving. “He didn’t bring a side dish with him, but he did bring a bag of Tupperware,” said Kelli. “He started packing food into those Tupperware containers to take home before the other guests could even get seconds.” Wait, what?!

Abide by the rules of food safety, friends

But Jack Z. may have him beat in the mind-blowing (and, well, kinda gross) mistakes department. “I made a whole slew of food, delicious, but nowhere for the leftovers to stay refrigerated,” he shared. “They were left out, and they were so good I kept them for a few days until I gave myself food poisoning.”