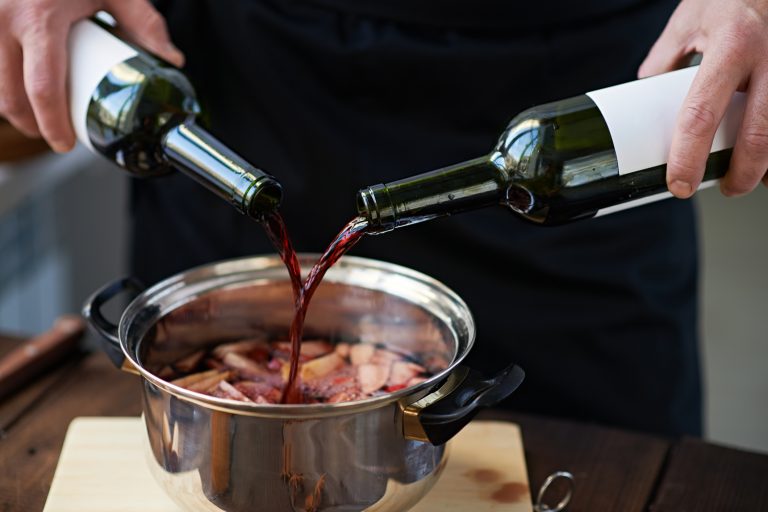 There could be many reasons you might want to get bombed for Thanksgiving. Maybe you are going home to family — the same family that has the philosophy “Why say something when you can shout it?” You may want to start hitting the sauce hard before you’ve even had any gravy.

However, if you are spending the day with pals, you might want to have a booze cruise of a day just to celebrate that you are with your chosen family and that you don’t have to listen to “I told you so,” “Why are you single?” or “You ruined your life because you didn’t listen to me.”

If you aren’t planning on drinking your dinner (more power to you, but you may be missing out), there are lots of ways to infuse the items on the menu with alcohol. Whiskey? Why, yes, we have that covered. Wine? We wouldn’t leave that off the list. Beer? But of course. Bourbon? Better believe it.

This menu has everything to make your head spin. Alka-Seltzer for the day after not included.

If you want to start your dinner off right, have a bar ready for your guests. Of course, if they’re good guests they will come bearing alcohol. But while that bird is baking, they will want something to nibble on. Instead of wasting time being a mixologist, whip up these Bloody Mary tomato bombs by Family Fresh Meals.

These delicious mushrooms from Lady Behind the Curtain have a hoppy flavor because they are sautéed in beer.

Fondue is a favorite with fruit and bread, but it can be very rich. So, heck, why not make it even richer? Just add some beer for a truly indulgent treat. Then give thanks, because it’s a day to be grateful that your body can tolerate a bowl full of beer-infused cheese.

Drunken noodles is another tantalizing tipsy dish. Whitney Bond’s recipe is savory as well as filled with the sauce.

Yeah, you could just go get a regular old Butterball and throw it in the oven. But when given the option of basting it with bourbon and a generous slathering of honey, you know what the right decision is. (Spoiler alert: It’s this orange bourbon slow-cooker turkey.)

They’re called sweet potatoes, so it should be OK to stuff them with sugar, nuts and booze, right? At the very least, there is no rule book that says you can’t. And until there is, a bottle of Bulleit is going to be used in this bourbon pecan sweet potato casserole.

If you are sick of looking at that cranberry sauce out of a can plopped onto a dish, then infuse your version with enough spirits and no one will know what shape it is. Either way, this vanilla bourbon-balsamic recipe will make a fan out of the most die-hard cranberry sauce critics.

SIDE DISH: Pumpkin beer mac and cheese with caramelized onions

One of the best parts of any holiday menu is the mac and cheese. Add pumpkin beer and caramelized onions and it officially becomes the crowning glory of Friendsgiving.

Sometimes you aren’t sure if you are in the mood for a pumpkin spice latte or a spiced eggnog drink. With this boozy pumpkin eggnog pie by Pineapple & Coconut, you don’t have to choose.

Those who love brownies will never back down. Double down on your devotion with some bourbon (like this decadent recipe from Treatology), because when you are making your case you should always be lit.

What is more American than good ol’ Jell-O, stuffing your face and getting sloshed at a gathering? In that grand tradition, these cranberry champagne Jell-O shots will help you accomplish all three.

The Fighting Irish may have gotten their name because they were fighting over these delicious cupcakes with not one but two types of liquor in them. We can all agree recipe creator American Heritage Cooking is a genius, right? Did we mention the cupcakes have a salted caramel filling?!

You didn’t think the night would end with food, did you? You have to have some cocktails to wash it all down and settle the stomach. And with all the apple-picking this time of year and with caramel apples being the treat du jour, this sangria is right on target.