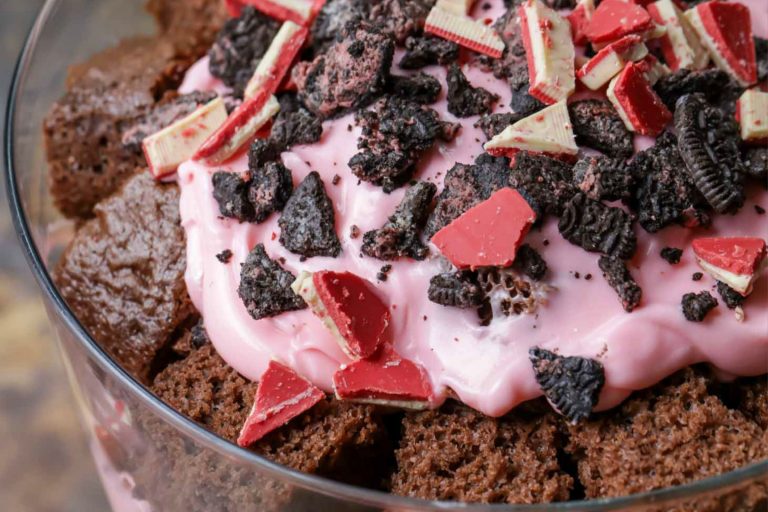 Christmas is a time to indulge in our favorite things. And while raindrops on roses and whiskers on kittens are nice, we really love Christmas baking. The smell of baked goods and the sound of Julie Andrews brings out a childlike joy in all of us. However, instead of going with the same Christmas desserts, this year try something new and delightful. We’ve found 15 Christmas desserts to make this Christmas. We hope you pick at least one to celebrate with this season.

Santa is the hands-down hero of Christmas for children everywhere and one of our favorite movie stars. One of our favorite Christmas movies is Miracle on 34th Street, a timeless classic about a girl who meets the real Santa at Macy’s one Christmas and a mother who has lost her belief. We love the little girl’s wide-eyed wonder, and we sympathize with the skeptical mom as unbelief becomes belief and eventually relationships are restored and rekindled.

Like Santa is the big winner at Christmas, cheesecake is always a family favorite around dessert time in our house. Cheesecake can be intimidating to make, but it won’t take a miracle to pull off these chocolate cheesecake Santa hats from Jo Cooks. These cute Santa hats are made with an Oreo cookie base, a chocolate cheesecake middle and topped with a strawberry and dab of whipped cream.

These desserts look impressive, yet no one will believe these cheesecake Santa hats are simple. The hardest part is finding the mini cheesecake pan! And in case you don’t have one, use a mini muffin tin lined with a paper liner. If you go this route, leave the Oreo whole for a base.

You’ll make believers out of all your guests when you serve these this Christmas.

One of our favorite scents is cinnamon spice. That lovely smell coats everything starting after Halloween, and it’s practically irresistible in baked goods. From The Beach House Kitchen comes this naked spiced layer cake with cinnamon buttercream frosting and sugared cranberries.

This layer cake is a naked cake, the current rage in bakeries and at weddings. Instead of a heavily frosted cake, naked cakes have minimal frosting and decoration, leaving a stripped-down look and feel. In this spiced layer cake, a thin crumb coat of frosting is spread on the outside of the cake allowing the true star, the cake itself, to shine through. This trend hit its stride in about 2014, and we think you’ll love it.

If you cringe like Bob Cratchit with Scrooge at the thought of baking a cake this Christmas, let us assure you this naked cake is the perfect solution to cake intimidation. In this cake, a delicious and spicy cake is sandwiched between thin layers of brown sugar cinnamon buttercream frosting. The sweet and light frosting highlights the subtle spiciness of the cake.

The sugared cranberries give just the right amount of decoration to this otherwise simple cake, and they are easy to make. Start with water and one cup of sugar and cook it over medium heat until dissolved. Then remove from heat and add 2 cups of fresh cranberries and cover with a lid. Let the cranberries sit for 10 minutes and then strain and let dry for at least an hour. A picturesque film of sugar crystals will form on the berries.

This elegant and easy cake will look perfect at your next Christmas spread. The look and flavor will have guests singing your praises.

Candy canes are the quintessential Christmas candy. The quaint red and white candy are synonymous with the Christmas story. The candy was developed over 250 years ago by a German church choirmaster who was concerned about the children of the choir staying quiet during the Christmas Eve service. So he asked a candy maker to make something for the occasion. The candy maker came up with a stick of peppermint candy to give to the children. Today the candy cane is frequently given out at nativity reenactments.

Over the years the design changed to include a red or green stripe and various reasons for the change have surfaced. What we know is that today’s popularity of the candy cane is largely due to the Bobs Candies company and has become the world’s largest producer of candy canes.

In this dessert, candy canes are turned into no-bake perfection. This candy cane pie from OMG Chocolate Desserts is sure to become your new favorite Christmas treat. The pie starts with an Oreo cookie crust made from crushed Oreos and melted butter. Then the crust is set in the freezer to firm up.

The filling consists of whipped cream, powdered sugar, and vanilla, which is beaten until stiff peaks form. For an extra minty kick add in a touch of peppermint extract. Softened gelatin, vanilla or cheesecake instant pudding, and milk are added to the cream to thicken the mixture so it stays set. Finally, cream cheese, butter, chocolate chips, and candy cane pieces are all added to make this the best cream pie you’ll ever have.

This chocolate pie is destined to become one of your favorite things.

One thing we never seem to have enough of, especially around Christmas, is time. While we love baking as much as the next person, the activity does take up that precious resource. What are we to do if we need homemade goodness with next-to-no time?

Naturally, turn to this Christmas red velvet poke cake. With minimal time you can create a cake that will satisfy palettes, warm bellies, and spread Christmas cheer for all the world to hear. We can almost hear Buddy the Elf asking, “Does it have sugar? Then yes!” to this red velvet poke cake. Of course, this festive and tasty poke cake is so much more than just sugar.

Poke cakes originated in the 1970s with the rise of boxed cake mixes, Jell-O, and Cool Whip. Poke cakes were created by Jell-O to boost sales for the gelatin dessert. Women’s magazines were filled with advertisements, coupons, and recipes for poke cakes to increase sales for Jell-O. When first created, poke cakes used flavored gelatin to pour over the holes of the cake.

Meanwhile, instead of sugary syrup, this Christmas red velvet poke cake from Yummiest Food calls for vanilla instant pudding. First mix up the boxed cake mix according to directions and bake in a 9×13 pan. Once the cake is baked, poke holes all over the cake with the end of a wooden spoon or chopstick. Then prepare the vanilla pudding by whisking milk with the pudding mix together, and then pour over the still warm cake, pressing the pudding into the holes as much as possible. Refrigerate the cake for several hours to allow the pudding to set.

The Christmas-y topping is made with whipped heavy cream and green food coloring, red and green sprinkles and curls of white chocolate. This poke cake will give you the Christmas dessert you need in a fraction of the time you have.

Starbucks may have created the perfect Christmas coffee beverage with the Peppermint Mocha. As soon as Halloween ends, the red cups appear to tempt us with their sweet and spicy goodness. It’s no surprise that Americans are no longer content with endless cups of hot chocolate. Peppermint mochas are now the go-to beverage for cold hands and stomachs everywhere.

Lemon Tree Dwelling took the popular peppermint mocha and the ultra-kitsch magic bar and combined them into the irresistible peppermint mocha magic bar. The base of this bar is crushed peppermint Oreo cookies and melted butter, which is mixed together and pressed into the bottom of your pan. Top with mini marshmallows, chocolate chips, white chocolate chips, shredded coconut, and crushed candy canes. Sweetened condensed milk is combined with instant coffee and then poured over the pan. Bake it for 20-25 minutes and joy to the world, dessert is done!

Cinnamon, allspice, ginger, and cloves are the essential ingredients for a spiced cake. These spices are among the oldest seasonings in the world. Men traveled thousands of miles through treacherous routes just for a bagful of these seasonings.

Cinnamon, specifically, is the most universally used spice, both as a seasoning and as a preservative. Its roots go back thousands of years, mentioned in embalming techniques of the Egyptians and as an anointing oil in the Old Testament. The Arabs brought cinnamon into Europe by difficult land routes, which made cinnamon a status symbol among the wealthy. As the middle classes desired upward mobility, the desire for cinnamon increased. Eventually, Portuguese explorers found their way to Sri Lanka where cinnamon is native. Wars were even fought over this important spice. Today, cinnamon is cultivated all over the world and is no longer rare, but its importance in cooking continues to this day.

Since spices were so rare in Biblical times, it’s easy to see why two of the gifts brought to the Christ child by the wise men were spices. Christmas and spices go hand in hand and we think these mini peppermint gingerbread doughnuts by Jessica Gavin will complete your Christmas dessert lineup.

This gluten-free dessert starts as a gluten-free spice cake and becomes a gingerbread with the addition of molasses. The molasses yields a moistness to the cakes and gives a pungent flavor that keeps guests nibbling. The glaze is made from powdered sugar, milk, and peppermint extract. The doughnuts are dipped into the glaze after baking and then garnished with crushed peppermint candies.

These delish doughnuts will not last long, so be sure to make a double batch. Treat your family to a fun Christmas treat this year with, mmmmm, doughnuts.

Want more? Check out these other Christmas desserts