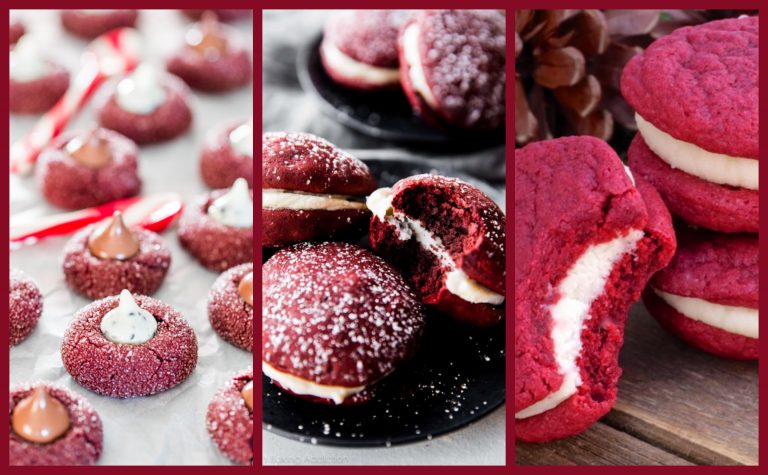 Red velvet cake is so much more than just chocolate cake with red food coloring. The combination of chocolate, buttermilk and vinegar yields a dessert that delights both the eyes and the appetite. Most red velvet cakes get some of their redness from food coloring, but not all.

Whether you’re looking for healthy (-ish?) or traditional red velvet recipes, we’ve rounded up 17 of the most decadent.

These red velvet kiss cookies are a Valentine’s twist on the classic Christmas thumbprint cookie. It’s a chocolate version mixed with red food coloring and then rolled in sugar. When the cookies are still warm, a chocolate Hershey’s Kiss is placed in the middle. Vary the topping with the seasonal offerings of Hershey’s kisses or even a chocolate peanut butter cup. The possibilities are endless.

Lemon Tree Dwelling has the ideal solution if you’d like to drink your red-velvet deliciousness rather than eat it. This red velvet mocha milkshake is perfect as a single serving, with all the flavors of chocolate and coffee graced with a beautiful reddish hue.

If scratch baking isn’t quite your bag, try these gooey red velvet cookies from Lil’ Luna. This recipe calls for a boxed red velvet cake mix and adds butter, vanilla, cream cheese and eggs. Once baked and cooled, these buttery creations are topped with whipped cream cheese frosting. They absolutely melt in the mouth.

Do-nut skip over this next dessert! Donuts are as perfect a dessert as they are a breakfast. And here from Sugar and soul is this fab recipe for red velvet mini donuts. With Bisquick, flour, milk, eggs and sugar, the donuts come together quickly. You’ll need a donut pan for the actual donut shape, or you can use a mini muffin pan. Consider doubling the recipe — they’ll fly off the counter.

Shortbread shouldn’t be limited to Christmas, and these red velvet shortbread cookies prove it. Although the link shows mitten cutouts, you easily can switch in hearts for the shapes. Top with the delicious cream cheese frosting and dust with Valentine’s sprinkles for a sweet treat this V-Day.

Traditional red velvet bundt cake with cream cheese center is great to share with a crowd. This cake has the traditional buttermilk, vinegar and cocoa powder for a super-moist, chocolatey taste. And there’s something so delicious about the way frosting falls on a bundt cake; with the pooling in the middle and oozing down the sides. 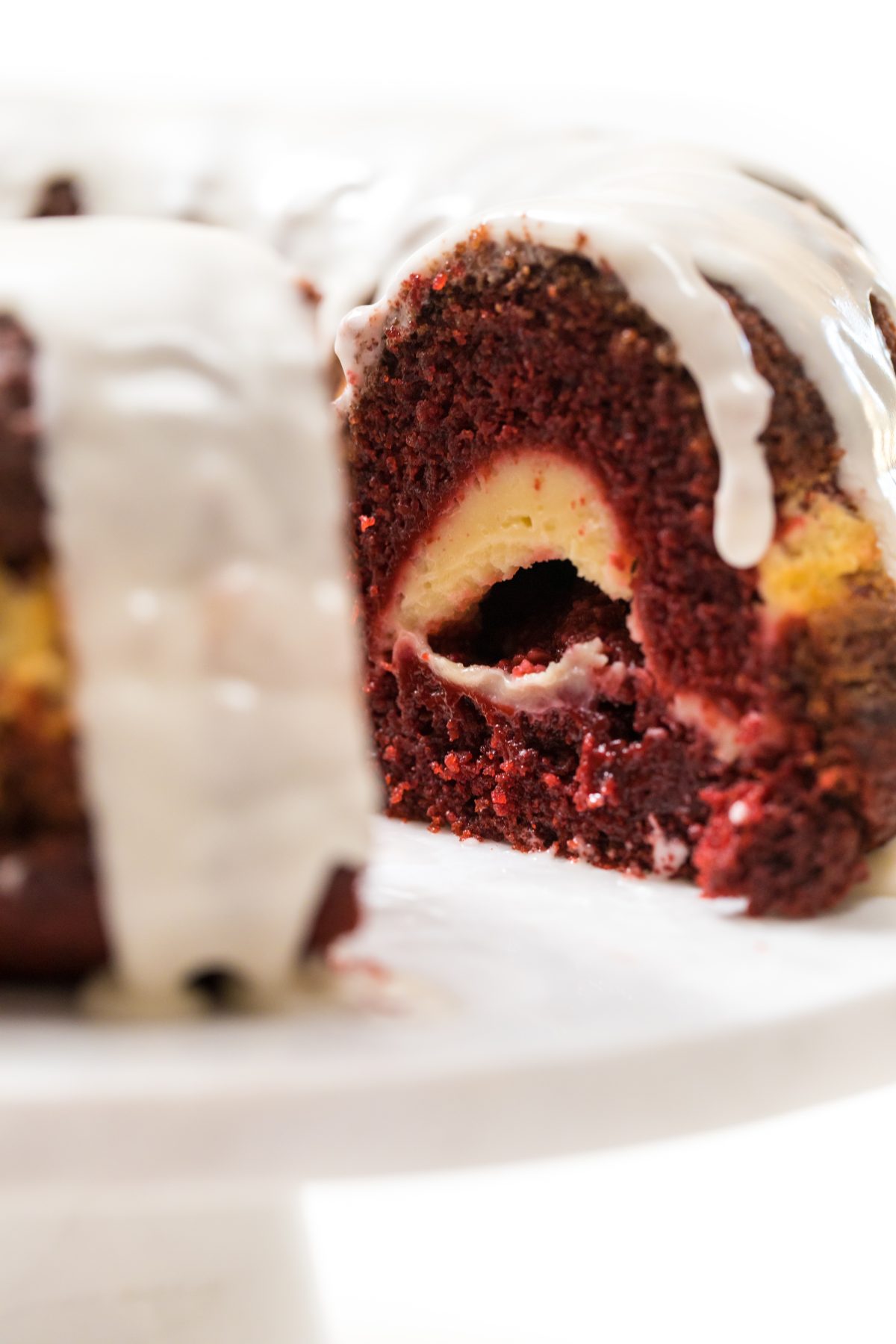 Regular old brownies are given a makeover with these red velvet Oreo truffle brownies. The bottom layer is red velvet cake, atop of which is laid a layer of Oreo truffle mix. Chocolate ganache and mini chocolate chips top off this out-of-this-world dessert. You’ll never want to make regular brownies again!

This red velvet earthquake cake gets its name from the seismic shift that appears to have flipped the whole thing upside down. The recipe calls for a boxed red velvet cake mix as the base, then adds coconut, pecans, chocolate chips, cream cheese, butter and powdered sugar. The cake is frosted before baking so that it melts into the cake. Every bite is full of ooey-gooey deliciousness.

No one will guess that these healthy red velvet vegan cupcakes are a better-for-you dessert! Chocolate-Covered Katie does it again — this time, by subbing in Vegenaise for the buttermilk and beet juice for the red coloring. Sounds crazy, but when you consider that mayonnaise is simply egg, vinegar and oil, Vegenaise is a pretty genius choice. And don’t be scared off by the beet juice. Beetroot is a longstanding food color staple.

Nothing says love like the sweet, warm scent of homemade waffles wafting from the kitchen —  and our beautiful red-velvet waffles with cream cheese glaze taste like an extra helping of love! These waffles are great for special occasions, but are easy enough to make on a lazy Sunday morning, too. 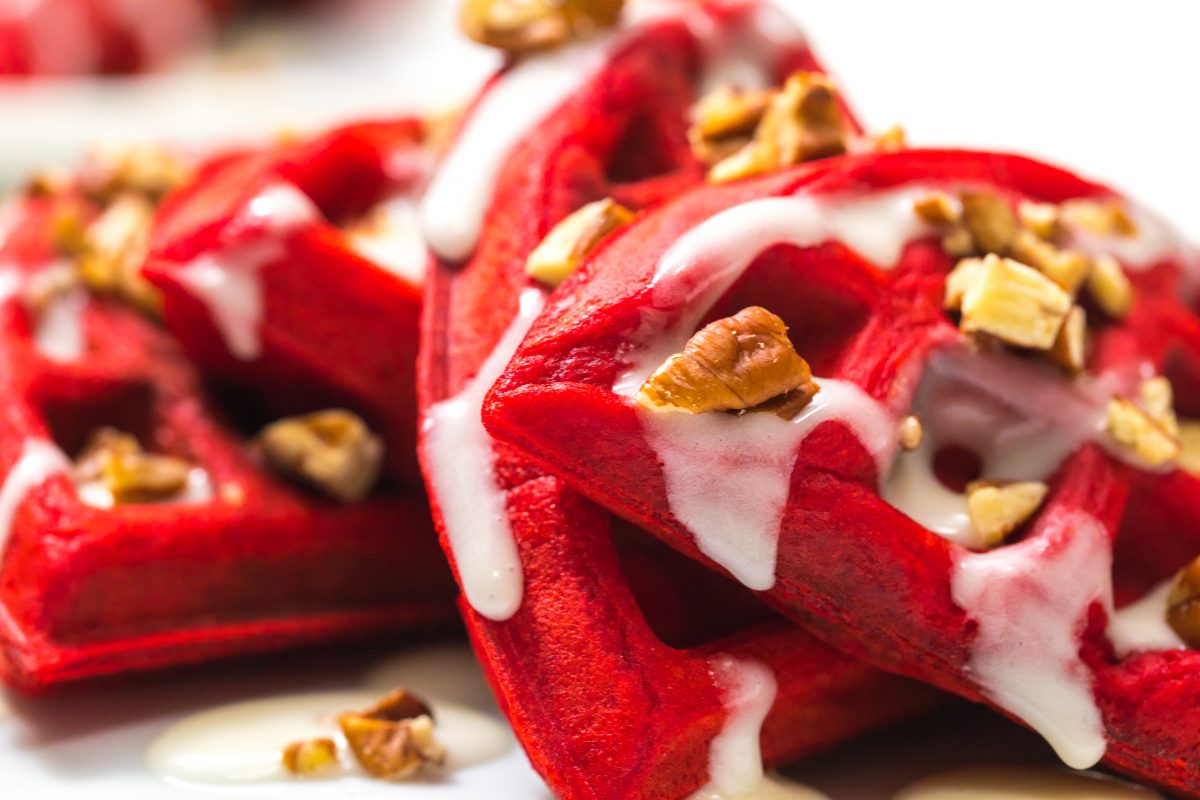 For a bite-sized dessert, turn to these red velvet truffles. You’ll bake and then crumble a red velvet cake, to which you’ll then add cream cheese. Roll the delicious mess into balls, then dip into white chocolate. Whether you dress them up with chocolate drizzles, some Valentine-themed sprinkles or something else your imagination dreams up, the striking red of the truffle is a beautiful contrast to the white chocolate — equally delightful for eyes and taste buds.

Red velvet and Nutella just seem so right together. Here, a chocolate chip cookie recipe gets a dash of red and is stuffed with frozen bits of Nutella for an amazingly easy and delicious Valentine’s Day treat. Nutella oozes out of every single red velvet Nutella-stuffed cookie, requiring some serious self-control of anyone passing by this dessert plate.

Red velvet sweet rolls — a variation on cinnamon rolls — are heaven-sent! Traditional cinnamon rolls, with hints of cinnamon and nutmeg, are combined with cocoa, chocolate chips and red food coloring. Once baked, they’re frosted with a vanilla glaze or, if you prefer, a traditional cream cheese frosting. Either way, these are tasty treats.

These red velvet caramel brownies start with red velvet cake mix. Once mixed, brownie batter is divided in half. The first half goes in the baking pan, followed by a layer of caramel cubes and chocolate chips. Finally, the rest of the brownie batter is poured on top. When baked, each brownie has melted caramel and chocolate chips for an absolutely addicting dessert. We dare you not to eat the whole pan!