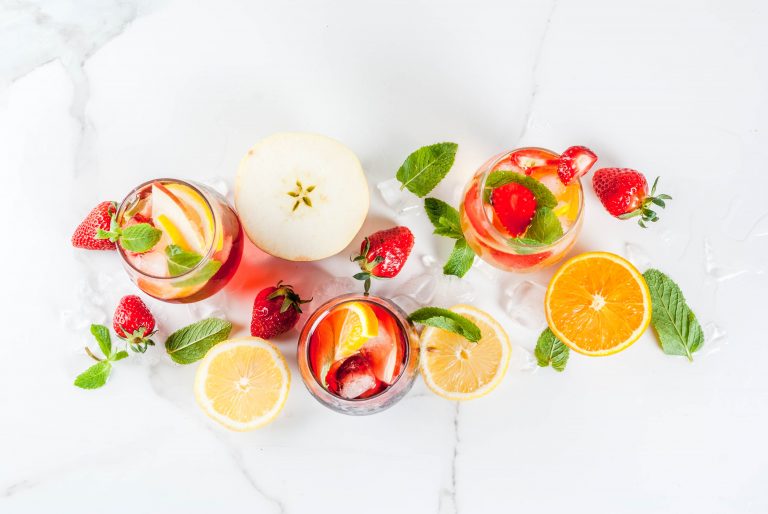 Who said a cocktail has to have liquor in it? Well, I guess if you look up the word in the dictionary, it does technically say it would consist of a spirit, but who’s really looking?

For an avid wine drinker like myself, I prefer a wine-based cocktail. And what better way to have a cocktail you love than in a large format. More to drink, right? Here are some delicious and easy recipes to incorporate wine as your main “spirit” into a cocktail punch!

Kalimotxo or calimocho is a classic Basque drink dating back to the 1970s consisting of equal parts red wine and Coca-Cola. I know, I know — I said Coca-Cola mixed with red wine. Don’t knock it till you try it. Back in the day, Coke was added to mask the taste of bad or sour wine. But as the tradition of the Kalimotxo evolved, good wines were used instead. I recommend following this recipe:

Combine all ingredients and serve over ice. I recommend using a torch or lighter to lightly toast the cinnamon sticks. This will bring out the flavor of the cinnamon and add a nice touch to the cocktail. Once you light them, extinguish the flame by putting the sticks directly into the liquid. If you do not have cinnamon sticks, feel free to omit this step. I do not recommend using ground cinnamon, as it will give the drink a weird taste and texture.

Also, typically any bottle of red would work, but I would recommend sticking with a Spanish wine. This cocktail came from Spain, so why not use wine from Spain?

I’ve never met a spritz I didn’t like, and I’ve never met a mimosa I didn’t like. So why not combine the two to make the ultimate sparkling wine cocktail? For this spritz, of course, Aperol is the key ingredient. The second most important ingredient is sparkling wine. I like to use sparkling rosé for this. The rosé adds a special touch of floral and fruit aromas. Next, grapefruit is my preferred juice. The grapefruit is bright and refreshing, but it won’t overpower or compete against the Aperol’s bitter orange flavor. The important tip here is to use freshly squeezed grapefruit. None of that bottled stuff. It just doesn’t taste the same. Top it all off with a splash of soda water and a slice of grapefruit. This spritz will have you begging for another refill.

To make this cocktail, simply combine all ingredients and stir. It’s as simple as that.

Mulled wine just screams fall and has always been one of my favorite holiday drinks. I mean, who doesn’t like snuggling up on the couch with a blanket and a warm beverage while it’s cold and snowy outside? Well, it doesn’t snow by me in Los Angeles, but you get the point. Mulled wine is like the fall and winter version of sangria, but better! The recipe is so easy and so delicious. I recommend choosing a full-bodied wine with low tannins and more pronounced fruit aromas such as zinfandel, merlot or a California Syrah. I’d steer clear of those super dry and tannic wines such as cabernet sauvignon, as the tannins might lead to a bitter taste. Think over-steeped tea. Then the key is to add spices, a little bit of sweetness and a hint of citrus.

MORE: Dessert cocktails are in & this Vanilla Chai Martini takes the cake

Combine all ingredients into a pot and cook it low and slow. Be careful not to boil the wine, as you don’t want to cook off the alcohol. Simmer for about 15 minutes. I always like to taste as it goes to make sure the sweetness is OK and that there is enough spice. Each bottle of wine might bring a slightly different element to your mulled wine, but who doesn’t like a little quality control testing before serving?

Thinking of creating your own wine cocktails at home? Check out our tips and tricks for creating craft cocktails below.

We want to know which wine cocktail is your favorite! Tag us on Instagram @makeitgrateful and #makeitgrateful!